Maria Bortot, a third-year PhD candidate in the Department of Bioengineering and Department of Pediatrics at the University of Colorado Denver/Anschutz Medical Campus, has been awarded the American Heart Association (AHA) predoctoral fellowship under the mentorship of Dr. Jorge DiPaola. Non-surgical bleeding (NSB) is a major complication among patients with aortic stenosis and end-stage heart failure supported by ventricular assist devices or blood pumps such as extracorporeal mechanical oxygenators. Although the mechanism for NSB amongst these patients is not clearly understood, it has been associated with acquired von Willebrand syndrome, a disorder characterized by loss 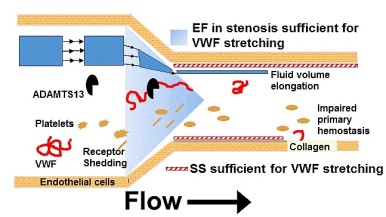 of high molecular weight multimers of von Willebrand factor (VWF). It has been proposed, but not yet demonstrated, that the high shear stress associated with VADs and AS can cause VWF elongation, facilitating excessive cleavage by its main protease, ADAMTS-13. Maria’s project is focused on assessing the effects of fluid dynamics on VWF conformation, cleavage as well as platelet activation and receptor shedding. Maria obtained her BS in Mechanical Engineering at the University of Sydney, Australia. Then she was awarded a scholarship by the Argentinean  National Atomic Energy Commission in Argentina were she completed her Masters in Materials Engineering at Instituto Balserio, Universidad Nacional de  Cuyo. She was then awarded a Fulbright Scholarship and moved to the University of Colorado, AMC to first complete a the Masters program in Bioengineering before joining the DiPaola Laboratory to pursue her PhD.

College of Engineering, Design and Computing News Role of hydrodynamic forces on hemostasis
%d bloggers like this: