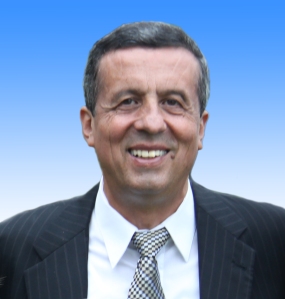 If you have a bank account and use email, you’ve likely benefited from the work of George Saliba, a 1981 graduate of CU Denver’s College of Engineering and Applied Science. He is credited with inventing Digital Linear Tape technology, which enables data storage in what we now call “the cloud.”

“I have an inquisitive mind,” said the native of Lebanon.  Saliba immigrated to the United States 42 years ago and now lives in Boulder. “I always ask the question, why do we always have to do it this way? and then try and think of a better solution.”

When Saliba was a boy in Lebanon, his family members thought his inquisitive mind would suit him well as a doctor when he grew up. But when he won a full scholarship to engineering school, he took the opportunity and hasn’t looked back.

He came to Colorado to further his engineering studies at the University of Colorado, earning a bachelor’s degree from CU Boulder in 1974 and a master’s degree from CU Denver in 1981. He went on to hold several senior engineering management positions at Storage Technology Corporation, Digital Equipment Corporation in Massachusetts and Quantum Corporation, and he is currently the president and CEO of Saliba Technologies.

“When I started in the field, the computer was in its infancy,” said Saliba, who remembers that the first disk drive he worked on was the size of a refrigerator, held just five megabytes of data and sold for more than $40,000. “Technology has come a long way, and being at the forefront of that explosion is very rewarding.”

Throughout his career, Saliba commuted around the globe, leading engineering teams in the United States, China, Korea and Japan. He remembers scribbling ideas for new inventions on paper scraps in foreign hotel rooms and napkins on trans-Pacific flights. Some of his most important inventions were written on United Airlines napkins.

Saliba received many awards for his work. He was voted the inventor of the year at multiple companies and received a lifetime achievement award at Quantum Corporation. However, he gives much of the credit for his success to the people on the various engineering teams he led.

“I wasn’t the only one who transformed these inventions into successful products,” he said. “Having a team that can work together, where everyone respects and trusts each other, is the key to success.”

Saliba believes in giving back where he was the beneficiary.

“I didn’t make it where I am by myself,” he said. “A lot of people helped me, especially at CU.”

Among his mentors, he remembers CU Denver professors Marvin Anderson, Burton Smith and so many others who helped him along the way.

Today, Saliba is a seven-year member of CU Denver’s CEAS Engineering Leadership Council. He also served for 10 years on the industrial advisory board for the CU Boulder College of Engineering and Applied Science.

His two sons seem to have inherited his loyalty to the university. Both of them earned bachelor’s degrees from CU, although the family lived in Massachusetts at the time.

“It’s a testament that CU is a good school,” Saliba said.